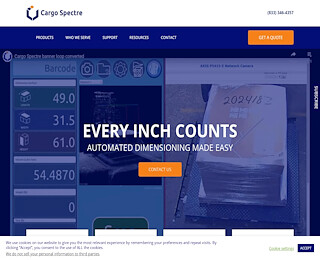 Automated dimensioning weighing systems are gradually going mainstream, and a lot of new vendors are infiltrating the market. While this has an apparent price reduction advantage, the presence of diverse cubing software makes choosing the best one for your business a tad confusing.

To make matters more complicated, different systems have different capabilities and features. Thus, your business may not benefit optimally from a system that claims to have served several other companies in your industry. Before pitching your tent with any freight dimensioning software, it’s vital to consider if the features they offer will meet your needs.

Four factors to consider when choosing a dimensioning weighing system

Automated dimensioning systems usually have limitations regarding the pallet weight they can effectively measure. Before making a decision, you should have an idea of the weight of the pallets your business has processed over the past six months or one year. The system you choose should give room for pallets that are slightly heavier than the heaviest pallet you recently processed. Besides, you should check that the dimension claims have been verified by the National Conference of Weights and Measures.

Asides the dimensioning range, the dimensioning accuracy of a pallet dimensioner should be verified before you invest in the software. Depending on the technology (infrared, ultrasonic, 3D scanner), different cubing systems may have varying dimensioning accuracies. While laser is the most accurate, it may not be affordable for businesses looking for low-cost pallet dimensioning software. Ultimately, you’ll have to reach a compromise between quality and cost, and commercial infrared sensors appear to be the middle ground for most small and medium-sized businesses.

Your system’s dimensioning weighing and scanning speed would reflect the amount of time you’ll save when you switch to an automatic dimensioning system. Typically, most systems have scanning speeds between 3 and 6 seconds. While this difference may be seemingly negligible, you’ll be surprised at how many hours you’ll be potentially saving on hundreds of thousands of pallets. Predictably, the fastest systems are usually the most expensive.

Acquiring a dimensioning weighing system and putting it to use is a huge investment for any company in the material handling and logistics industry. Before paying any company for their technology, you must verify that they have been involved in research and development. You wouldn’t want to pay for a software that was developed overnight and would enjoy little to no upgrade post-development.

Furthermore, it would be best to ensure a comprehensive warranty covers the entire system or at least specific components. You will also need to verify that the company’s representatives will always be on hand to provide technical support.

Contact us for the best automated dimensioning made easy

Have you been searching for a top-notch parcel weighing and scanning system for your business? It would be best if you look no further than Cargo Spectre Dimensioning and Weighing Systems. Our system promises unparalleled effectiveness as well as ease of use, and they guarantee higher revenue and improved processes. Contact Cargo Specter on (832) 463-0606 or visit https://www.cargospectre.com/contact/.

We welcome your comments!

This website uses cookies to improve your experience while you navigate through the website. Out of these cookies, the cookies that are categorized as necessary are stored on your browser as they are essential for the working of basic functionalities...
Necessary Always Enabled

Any cookies that may not be particularly necessary for the website to function and is used specifically to collect user personal data via analytics, ads, other embedded contents are termed as non-necessary cookies. It is mandatory to procure user consent prior to running these cookies on your website.